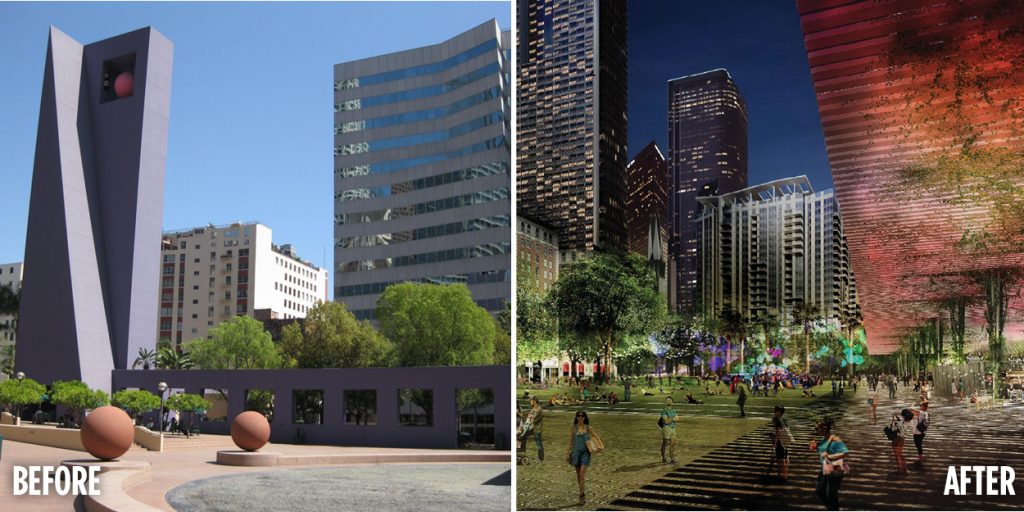 Pershing Square in downtown Los Angeles, before and after Agence TER’s proposed redesign

Right here in the backyard of our Los Angeles office, we’re looking forward to some exciting changes in one of downtown’s most iconic public spaces—Pershing Square!

Situated in the heart of downtown’s core, this central, accessible and sprawling five-acre park has the potential to become a vibrant hub of downtown community life. With renewed energy and interest growing in downtown Los Angeles, the 150-year old Pershing Square has been identified as a public space that’s ripe for activation.

The park has undergone a series of redesigns over the years, the most recent of which has become the subject of much criticism: a ten-story purple bell tower, surrounded by orange spherical sculptures and an abundance of concrete. In 2013, Los Angeles Times architecture critic Christopher Hawthorne echoed the public’s widespread disappointment in Pershing Square, calling it “a perfectly depressing symbol of L.A.’s neglected public realm.”

The nonprofit Pershing Square Renew is out to change this.

This winning proposal was marked by elegance, simplicity, openness and connectivity. To quote Agent TER’s Henri Bava, “Our team’s approach to the square is to reconcile nature and city, creating an attractive hybrid between plaza and park.”

With the winning proposal selected, Los Angeles is one step closer to seeing a new and improved Pershing Square. Huizar will be disclosing additional information about funding the $50 million project in the coming weeks.

If all goes according to plan, Angelenos should see Agent TER’s design come to life in Pershing Square by 2019.

Check out the video below to learn more about Agence TER’s winning proposal.