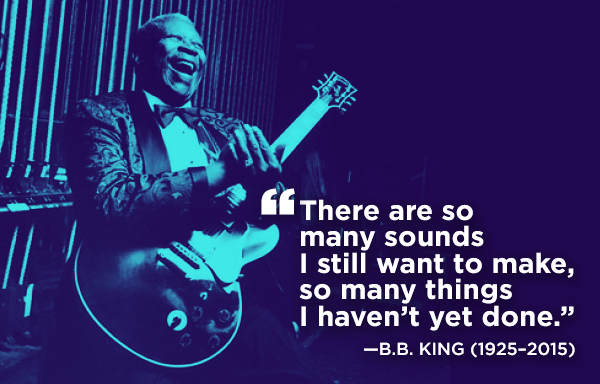 Last night, legendary bluesman B.B. King passed away at the age of 89, devastating not only blues fans but also music lovers around the world. For more than half a century, King defined the blues with his gritty voice and distinctive style of guitar playing that earned him spots in the Blues and Rock and Roll Halls of Fame and influenced the likes of Jimi Hendrix, Eric Clapton, George Harrison and more. Among the many highlights of his long career include a Presidential Medal of Freedom, 15 GRAMMYs (including a Lifetime Achievement Award) and the nickname “The King of the Blues.”

Born Riley B. King on September 6, 1925, in the Mississippi Delta, King acquired the moniker “B.B.” while working in Memphis, Tenn., as a singer and radio disc jockey under the name of “The Beale Street Blues Boy” (later shortened to “Blues Boy” and then finally, “B.B.”). He got his first big break in 1948 in West Memphis, Ark., performing on Sonny Boy Williamson’s radio program, eventually leading to a recording contract and his first national R&B chart-topper, “Three O’Clock Blues,” in 1951. Throughout the ‘50s, he continued to land hits with songs like “Every Day I Have the Blues” and “Sweet Little Angel,” scoring 20 chart items and establishing him as a name to watch in blues and R&B. 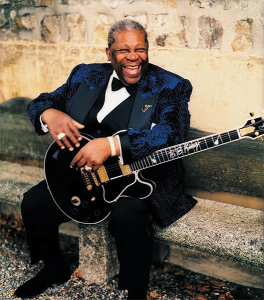 Although King had many guitars over his long career, he named each one “Lucille.” In 1967, he released an album titled Lucille, which included a song of the same name.

It was also during this decade when King made the famous decision to name his guitars “Lucille.” After two men brawling over a woman set the dance hall where he was performing ablaze, King evacuated safely but nearly died going back for his beloved $30 acoustic guitar. From then on, King named each of his guitars after the woman, Lucille, as a reminder to never fight over women nor run into burning buildings ever again.

Over the next few decades, King continued to pioneer his fearless blend of traditional blues with jazz, swing, pop and jump by recording seminal album Live at the Regal, opening for The Rolling Stones and winning a GRAMMY for his iconic version of “The Thrill Is Gone,” widely considered one of the greatest blues songs of all time. His visionary and immediately recognizable style made him an international star, but he never forgot his roots in the Mississippi Delta.

In 1991, he opened the B.B. King’s Blues Club on Memphis’ Beale Street and the B.B. King Museum and Delta Interpretive Museum in his hometown of Indianola, Miss., in 2008. Despite a farewell tour in 2006, King remained active with an average of over 200 shows per year until 2014, when diabetes-related complications forced him to stop touring. He died in his sleep on May 14, 2015, at his Las Vegas home, survived by his 11 children.

And he never was.