Eccentric, one-of-a-kind vehicles of all shapes and sizes—yes, that includes larger-than-life stilettos on wheels—are making their way to downtown Houston for this weekend’s 28th Annual Houston Art Car Parade. This rolling exhibition is free and open to the public, making it Houston’s largest free public event. With Levitt Houston opening in Willow Waterhole Conservation Reserve in 2017, we are thrilled to see a free public arts event going strong! 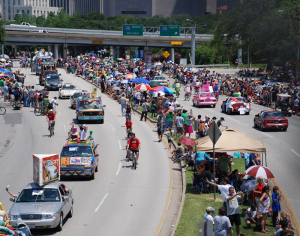 The Houston Art Car Parade Weekend is packed with family-friendly activities for the curious, the creative and, of course, the car lover. Activities include: a sneak peak of the vehicles with a free performance by GRAMMY winning artist, Aaron Neville; the Legendary Art Car Ball; the Main Street Drag, which brings 10-15 cars through different parts of the city, allowing residents without access to Sunday’s festivities a chance to experience the fun; and the pinnacle of the weekend: the Parade itself—which will take place Sunday, April 11th at 2pm, rain or shine. On that festive day, nearly 300 wheeled-creations—from cars to bikes to motorized creatures—will parade down Houston’s Allen Parkway where hundreds of thousands of spectators will gather. This year participants hail from 23 states and three countries.

While I haven’t made it to Houston’s Art Car Parade, my introduction to art cars did take place in the art car capital of the world itself, at Houston’s Art Car Museum. This tiny space—aptly nicknamed “The Garage Mahal,” due to its distinctive domed scrap metal and chrome exterior—showcases quirky labors of love. Looking into a car with every inch of its interior and exterior covered with found glass, I found myself admiring the owner’s painstaking process as much as the final product itself. 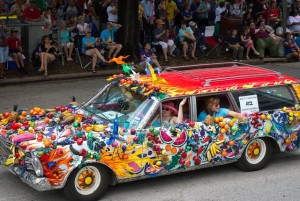 “The Fruitmobile” by Jackie Harris; Courtesy of the Houston Car Art Parade

Like the Art Car Parade, the Art Car Museum celebrates the freedom of self-expression that sits at the heart of Houston’s art car movement—the freedom that rolled onto the scene in the mid-1980s with artist Jackie Harris and her moving still life, the “Fruitmobile.” After donating her 57’ Ford station wagon, adorned with painted and decorative 3-D fruits, to a local fundraising auction, Harris’ Fruitmobile became an instant automotive celebrity. In 1986 the Fruitmobile and a handful of other art cars were put on display, launching Houston’s love affair with the art car. In 1988, Houston experienced the first official Art Car Parade—which took expression of freedom a bit further than authorities had anticipated when the parading cars reached the end of the route and turned around to drive down the route a second time. While the parade has grown more orderly over the years, it has kept its creativity and quirkiness—each year, drawing hundreds of professional and folk artists and their vehicles covered in fruit, shells, comic books, glass…and just about anything you can adhere to a car.

Here in Los Angeles, a city where car culture thrives, we know a thing or two about expressing identity through cars. From hot rods to low-riders, Angelenos know how to modify rides to reflect personal styles. We’re blown away by the creativity and ingenuity shown year after year by Houston Art Car Parade participants. It’s not every day you get to see hundreds of mass-produced vehicles transformed into one-of-a-kind works of art. We hope to some day experience this vehicular spectacle in person!