Levitt has the perfect recipe for summer fun

Nothing says “summer” like evenings filled with free, live music in a beautiful outdoor setting. Add yummy picnics with friends and family, then shake it up with dancing on an inviting, green lawn, and you’ve got the makings of an unforgettable summer. That’s exactly what six Levitt venues are serving up across America as 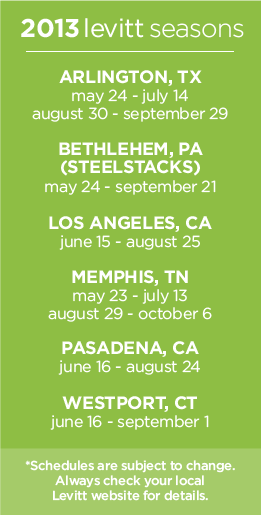 they launch their 2013 seasons of 300+ free concerts celebrating community, culture and the arts!

It all starts this week with a full slate of all-star performers—including artists new to Levitt stages and returning favorites—plus even more exciting special events and activities, bringing people of all ages and backgrounds together in Levitt cities across the country.

Here’s a sneak peek of what you can expect this summer at Levitt venues across the nation! 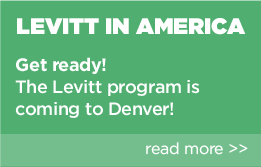 awe-inspiring Texan psych-pop choir Polyphonic Spree on May 25, whose 22 members dressed in a rainbow of choir robes are a must-see!

Believe it or not, 2012 marked Levitt SteelStacks’ first full season with 53 shows that packed in neighbors from all over Pennsylvania’s Lehigh Valley. The summer season, which opened with a special preview weekend on May 17, promises to dazzle audiences given its stellar lineup, including Rock and Roll Hall of Famers The Drifters (“This Magic Moment,” “Under the Boardwalk”) who take the stage on August 17!

Long before it had a Levitt Pavilion, MacArthur Park in Los Angeles already had achieved legendary status in the music world with the hit song “MacArthur Park,” written by Jimmy Webb and recorded by Richard Harris and Donna Summer. In celebration of the 45th anniversary of the song’s release, Levitt L.A. is kicking off its 2013 season on June 15 with Jimmy Webb himself, who will be performing “MacArthur Park” in the park, along with some very special guests. It will be an evening full of surprises, and you won’t want to miss it!

Fun, funk and festivals—that’s what audiences can expect this year at the Levitt Shell. Stepping onto the historic Overton Park stage are dozens of spectacular artists including: funk bassist George Porter, Jr. (June 13), country singer/songwriter Ray Wylie Hubbard (June 20), alt-country artist Son Volt (June 27), and blues guitarist Sonny Landreth (July 5). Plus, it’s the return of a Memphis favorite, Todd Snider’s What the Folk? Festival on June 15 with a new roster of amazing performers! And to wrap up the spring season, the Levitt Shell will present a special 40th anniversary celebration of The Recording Academy’s Memphis Chapter (July 13).

Also back by popular demand is the Luckman Sidestage, a pre-concert community stage programmed with a variety of special performances and activities. Local artists can share their talents on Open Mic Sundays. Other evenings feature local DJs, Zumba and dance classes, yoga workshops, and more! Plus, beginning June 19, Levitt Pasadena kicks off its weekly Wednesday kids programming, starting with celebrated L.A. favorite, the Bob Baker Marionettes.

The night comes alive in Connecticut this summer as the original Levitt Pavilion for the Performing Arts (Levitt Westport) celebrates four decades of music and entertainment under the stars! Audiences can expect an exciting season of first-class performers, as always, and this year they’ll be enjoying them on Jesup Green. Why? Because this season will be fully produced off-site as construction of the all-new state-of-the-art Levitt Pavilion gets underway in the coming weeks.